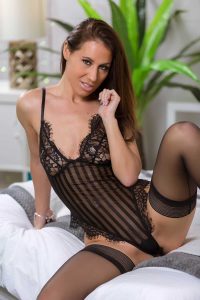 Shortly after her 19th birthday Jess started appearing on Sexstation where she would interact with viewers on the mic, over text and by taking dirty calls, all whilst stripping naked and showing off her small perky tits, shaved pussy and peachy ass to camera. Jess’s Sexstation shows were always energetic and seductive, with Jess injecting an element of fun into each performance either by her choice of outfit, roleplay costume or position, or with her variety of toys and props.