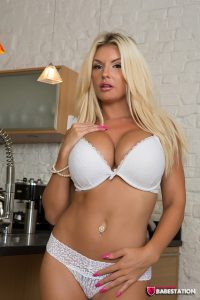 Tommie first began her glamour career by appearing in lads mags such as Nuts and FHM but she quickly developed a taste for the more risque photoshoots and started shooting for top shelf magazines. She loved stripping off for the camera and said she felt like a true seductress while doing it. Unsurprisingly, Tommie gained a huge fan base on Twitter and other social media with her raunchy layouts and it was then she decided to start shooting xxx-rated movies. With Tommie being a level-headed businesswoman she approached some of the biggest porn production companies where she was instantly snapped up and quickly became one of the highest paid babes on the books. From there Tommie went on to shoot hardcore movies and internet videos all over the world including America where she was a regular at the AVN awards ceremony.

These days you’ll find Tommie likes to spend more of her time at home and does a lot more solo fuck shows – preferring to tease you with her pussy on BSX rather than travel the country. She has made some great friends at Babestation and you’ll often see her laughing and joking on the show with the other girls. She really is a fun loving girl!