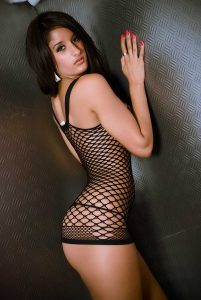 Preeti is a Surrey girl originally but now resides in west London. She loves all the things that a young woman living in London enjoys, like: shopping, socialising, and clubbing with her friends. She also clearly takes care of her body and goes to the gym at least three times a week. Preeti’s other passion in life appears to be her dog, a very cute French bulldog; whom she refers to affectionately as her “little baby”.

Preeti is also a fully qualified hairdresser and colour specialist, and it was during this time in her life that she began her career as a glamour model with her sister Priya Young. The twins were scouted by a men’s magazine and the numerous photo shoots that followed soon turned into a full time career. The girls subsequently started on Babestation, and since then Preeti has gone on to become a true Babestation All-Star in her own right.

Preeti is a free spirit who usually goes out to get what she wants herself. Although she’d like to travel a lot more, with a particular passion for South America, she doesn’t like to make too many plans.

She tells us:
“I find with my life its best not to make plans. My life seems to drastically change from one year to the next…”

Sex and the ideal man

Preeti has a tendency to go for the guys with the muscles and tattoos, however, following a few disappointments she has recently concluded that there isn’t always a personality beneath these features. She now finds personality more appealing, although she still has a weakness for the muscles! She tells us that she likes a guy to make her laugh and to be confident in themselves because of her job, and has no time for those who want to control her; in her own words “I am fiercely independent!”

With Preeti you should try your best to be friendly and reasonably chatty; that’s not too hard is it? She loves callers who actually try to converse with her.