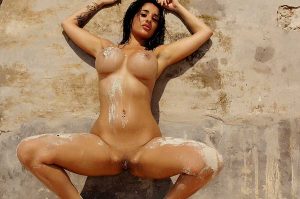 Priya was a total newbie to the industry when she and her twin sister Preeti Young first approached Babestation over 7 years ago. Priya had never been in front of the camera before but she proved to be a natural on screen and Babestation knew they had struck gold. Fans couldn’t get enough of her curvy figure and exotic looks and she quickly became one of the top ranking babes.

Priya is a very savvy businesswoman and doesn’t like to rely on the glamour industry for her sole income. She has set up many business ventures over the years including a health food business, a glamour website and has even purchased an investment property with her twin sister, Preeti. This girl certainly has a wise head on her shoulders!

Because Priya works so hard, she also like to play hard. She loves to party in London with her close friends, Brookie Little and Paige Turnah, and eat out at the best restaurants. She believes travel broadens the mind so she and her sister often jet off to exotic locations around the world at a moments notice.

Priya is one of the finest models we have on our books and if you ever get the chance to chat to her you should take full advantage of that. Her big booty, curvy hips and big boobs will totally mesmerise you!